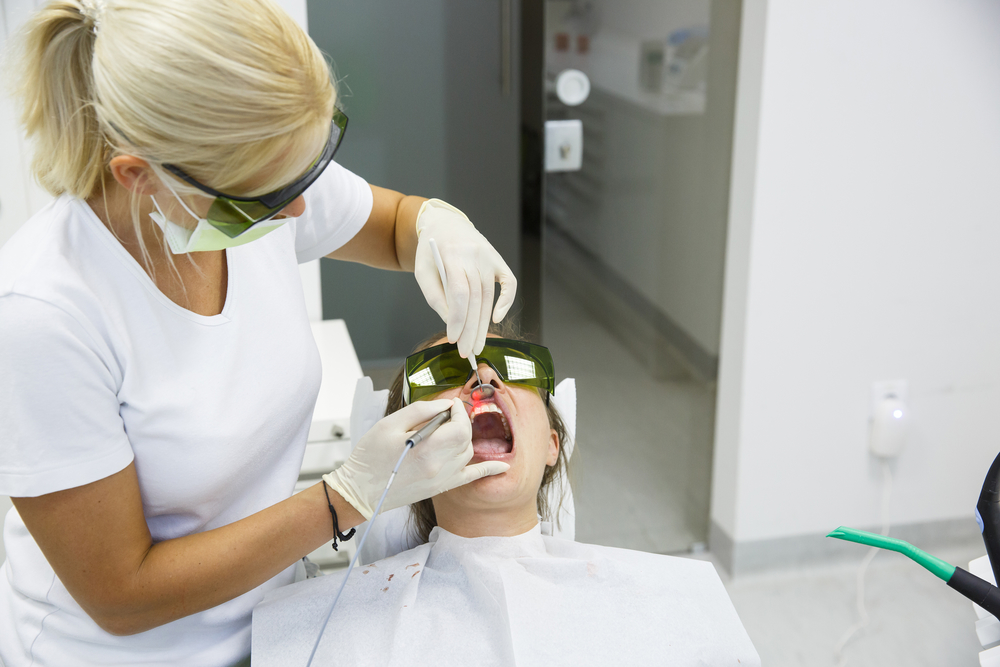 We apply closed curettage from our services in case the patient suffers from periodontal inflammation that is if the patient is diagnosed with parodontitis. Parodontitis always progresses from gingivitis. Although not all gingivitis advances to paradontitis but if the disease develops, it can spread to the deeper periodontal tissues, the periodontium and the bone tissue that supports the teeth. There are a lot of general precipitating factors in an organism (diabetes, immunodeficiency, hereditary factors, and smoking) which are responsible for the spread of the gum line gingivitis to deeper.

If the gingivitis starts spreading from the gum line, then one of the first signs is the gums receding from the tooth root. A so called gingival pocket is formed between the teeth and gums. Over the time food debris can easily accumulates in this area, and it leads to dental plaque and tartar surrounding the teeth. Later, the plaque debris is accumulated in the gingival pocket which will also serve as residence for the inflamed tissues. As a result of the gradually deteriorating gingivitis, the junctional epithelium also gradually deteriorates, the connecting tissues of the tooth get ruined and this might lead to the loosening of teeth and tooth loss.
During the curettage, the inflamed tissues and the plaque debris are removed from the side of the gingival pocket eliminating bacterial infections and their spread in this way.

The process and the outcome of the treatment

First, the plaque and tartar visible at the surface of the tooth are removed and as a result of this gingivitis diminishes and by applying a correct brushing technique the chance of developing a new layer of tartar decreases. Then the, treatment under the gingiva is begun, which includes the removal of the infected tissues and plaque located in the root surface. Due to its hardness completely different tools should be used to remove it, as it was previously. Thanks to the treatment, the surface of the root becomes smooth and the gingiva pocket becomes healthy, however, it takes a few weeks to heal. After the intervention the gums might be swollen, red and prone to bleeding which decreases after a few days and heals after a couple of weeks. Thus the teeth become healthy and aesthetic and in order to keep up this condition it is recommended to use a correct brushing technique.

Detectable causes and symptoms of the disease:

Due to poor oral hygiene often gingivitis develops as a result with the symptoms of sensitivity, itching, bleeding, and red or dark red gums. Besides this, often there is some pain in the specific area in case of slight pressure or when touching it. In some cases, the sensitive gum swells and may cover the major part of the crown, while in some other cases exactly the opposite can be observed by the patient, that is the gum will start to shrink.

Gingival pocket presentation begins with the inflammation of the gum tissue, i.e. the gingival sulcus. In such cases, the inflammation itself destructively affects the connective tissues, and degeneration is observed at the gingival fibres. In addition, the epithelial cells of the junctinalis can proliferate along the root and a so called extrusion is formed consisting of 2-3 layers due to the inflammation.

The deterioration and the necrosis of the alveolar bone is part of a long process which can have very serious consequences. Everything starts with the accumulation of the tartar which has already been mentioned so many times. It irritates the connective tissue of the tooth more and more over the time and the reaction of the connective tissue for it is increasing inflammation. Due to the inflammation, cell mediators are also released, which will lead to the slow necrosis of the tooth and it will no longer able to regenerate itself. If professional treatment is not started in this stage, the situation is only getting worse. The tooth neck which is not protected by enamel will slowly appear and it will be exposed to all external effects. Due to the concave shape of the tooth neck the plaque and tartar accumulate on it more easily and after a while the patient will not only experience a strong inflammation but also tooth neck cavities. Considering the worst case, the connective tissue itself is so weakened that it cannot fix the tooth to the bone and it can lead to the loss of teeth.

Few people know that in general teeth are featured by a minimal amount of horizontal motion. In case this rate increases, we talk about increased tooth mobility disease. The causes of this may be the length and shape of the tooth root and the bone loss. The tooth movement may be increased by the chronic situation of the teeth but even an insufficiently ground filling can cause occlusal trauma resulting mobility.

We may speak about teeth drifting if the balance between the forces on the teeth and status of the periodontium upsets. Furthermore, in case teeth are missing for a longer period of time tooth migration, which can cause bite anomaly, is also a common phenomenon. This problem is mostly observed towards the front of the mouth and at the same time mobility is often observed at the patient.

Subjective symptoms include tooth sensitivity which can be experienced while the teeth are touched or even while chewing. In case of consuming food and drink with different temperatures, even strong pain can occur as a complaint and in some cases our patients come to us because they have some rapid course, throbbing pain.

A lot of people suffer from the unpleasant mouth odour which is most often caused by food trapped between the teeth and in decay. In addition, bacteria accumulated on the back of the tongue, tooth decays, gingivitis, or gum diseases may also cause the presence of halitosis.

This website uses cookies to improve your experience while you navigate through the website. Out of these, the cookies that are categorized as necessary are stored on your browser as they are essential for the working of basic functionalities of the website. We also use third-party cookies that help us analyze and understand how you use this website. These cookies will be stored in your browser only with your consent. You also have the option to opt-out of these cookies. But opting out of some of these cookies may affect your browsing experience.
Necessary Always Enabled

Any cookies that may not be particularly necessary for the website to function and is used specifically to collect user personal data via analytics, ads, other embedded contents are termed as non-necessary cookies. It is mandatory to procure user consent prior to running these cookies on your website.